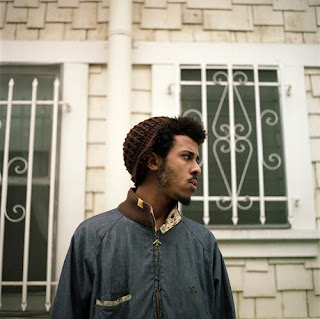 BLU
If you want to know why I moved to Los Angeles this Winter, all you have to do is listen to the good hip hop that comes out of the region. When I listen to these artists, I feel Cali seeping straight out of their words and their flow. Blu is one of those artists. To describe the artist: his lyrical creativity seems boundless, his flow is complex yet nonchalant, his beats channel the spirits of old souls trapped in the records he samples, and his lyrics are a reflective account on life - putting his insights, anecdotes, and emotions into his songs. Blu only speaks what's true to him and doesn't rap about anything not part of who he is. I really respect artists like this - one's that don't have to brag and fabricate stories to be either interesting, entertaining, or thought provoking.

I was first introduced to Blu by downloading his debut album, Below The Heavens (produced entirely by Exile) released in 2007. I must say I have vivid memories at college of where and when I listened to this album over and over again. It really is a stunning piece of work. Great songs such as "Soul Amazin' (Steel Blazin')", "The World Is...", "In Remembrance...", "Good Life (Show Me)", and "Blu Colla Workers" stand out in my mind for their sincerity. --> Download Below The Heavens

Then I moved onto the So(ul) Amazing (2008) mixtape, which again delivered a bundle of great songs like "Mars Remix", "Its Okay (Pt. One)", "Maintain", and "MyBoyBlu". Even though the mixtape didn't have a consistent feel (it was just a random collection of Blu songs), it showed his versatility by spitting on all different types of beats. It is a great compliment to his debut album. --> Download So(ul) Amazing

Next listen came an album entirerly produced by Blu and rapping by Sene called ADayLate&ADollarShort (2009). The album as a whole doesn't have much replay value, but the following songs are amazing: "JusASuggestion", "QuarterWaterSupporter", "PressPause", "TheWonderers", "WonLover", & "EyesDry: TheAfter". I can also remember exactly where I was when listening to this album. --> Download ADayLate&ADollarShort

Now I've just started dabbling with another new Blu mixtape (!!) called HerFavoriteColo(u)r released on for free on Valentine's day this year on Blu's MySpace page. Oh how I wish this mixtape was longer (it's only 30 minutes!). It uses many old time sounding jazz and soul samples that give the feeling of being in a 1930's movie (see video below for song "Amnesia"). By rapping over uniquely sampled beats, including a few instrumental tracks, and monologues from old recordings to paint the picture, Blu juxtaposes old and new sounds beautifully and in a way that no other rapper to my knowledge has done before. Way off the beaten path, this mixtape is for those looking for a change of pace in the rap race. --> Download HerFavoriteColo(u)r