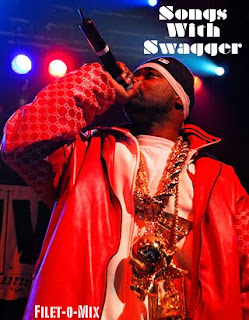 
"So my theme with this group is 'swagger'. They are the types of songs that come up on your iPod when you're walking down the street, and immediately cause you to change your stride, walk confidently, bob your head. So much of hip hop revolves around that swagger, that ego and self-assurance, so I thought it deserved a mixtape at the very least."

I think Kate has picked a great bunch of songs here that really bring out the swagger in all of us, yet the term 'swagger' should not be thrown around willy nilly. I encourage you to watch this awesome video interview that I saw 2 years ago (HERE) where one of my favorite hardcore yet conscious rappers Styles P dismissed the overuse of the term swagger as a trend in hip hop (Probably since swagger is one of those things that if you have to tell people you have it, then you probably don't have it). To me, 'swagger' is defined by being so original in style and downright cool that it makes others want to emulate you. These songs embody that 'swagger' in musical form. Sometimes you can just tell those who have swagger from those who don't. For example, Ghostface Killah, who I have selected for this mixtape's artwork (above), defines the term to me. I mean just do a google image search of him and you'll know why immediately.

As always, these tracks were officially approved and arranged by me (Filet of Sole) for your listening and swag inducing pleasure. Be sure to let everyone know you're bumping that good good hip hop wherever you go by bobbing your head to the beat and letting your friends know where you got it (HeadPhoneHome.com). Keep the tunes flowing and hit me up with your mixtape concepts at headphonehome@gmail.com and we'll collab. Now some visuals below of two tracks on the mix to go along with the aural pleasure.