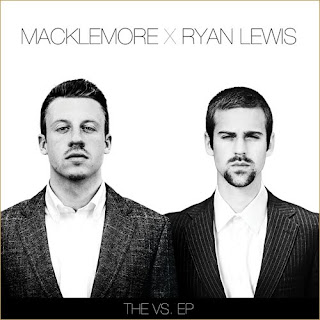 This new EP that dropped today is what I've been looking for in Hip Hop music for a few years now, ever since I started fantasizing about what elements would comprise my ideal hip hop album (more on that in a future post). To date, this EP is the closest manifestation I have come across. The concoction of a downright passionate, intelligent, self-reflective lyricist (Macklemore) mixed with a visionary producer willing to overstep boundaries (Ryan Lewis), throw in superb live instrumentation that hip hop as an art form is lacking in general (violin, trumpet, drums), and what you get in this project is a seamless bond between new sounds that excite and tantalize the hip hop senses. Is this what hip hop has been missing...? I think so. Is this a new branch sprouting off of hip hop's genealogical tree...? Only time will tell...

Now about the Music. The music is an overall AMAZING experience (I'm learning that you can't write about how music sounds, so just take my word for it and listen to the 7 tracks already!).

Now about the EP. Two things make this project even more unique than what's stated above: 1) The brilliant concept behind the production on the EP and 2) The motivation behind the lyricist and his content. First, the production concept by Ryan Lewis was to blatantly sample extremely sonically appealing parts of songs from relevant contemporary bands (these artists include The Red Hot Chili Peppers, The Killers, Arcade Fire, Beirut, Antony and the Johnsons). Lewis's willingness to expand the concept of hip hop by appropriating unconventional contemporary rock samples shows a true passion for making music (especially because they cannot release this EP for sale due to copyright laws). In my opinion, blurring genre lines like this is necessary for hip hop's revival (meaning a true separation between shitty hip hop and good hip hop will emerge not only on a sonic level, but on a conceptual level as well).

The second unique quality of the project involves the motivations behind the lyricism. Most MC's lack what Macklemore has... a reason for making music. This man quite literally makes music to live. As he states in his song "Inhale Deep" on his first album The Language of My World "If I'm not making music, why the fuck am I existing?". Music has no doubt been the driving force recently that has helped save this talented man's life from personal struggles with drug addiction and severe depression (read this fascinating article to find out more). Now, through faith and music, Macklemore's spirit has risen once again to new heights of creativity. Not many MC's have that all important reason behind making their music like Macklemore does... and if you notice, all of his tracks have a topic of focus as opposed to many rappers who never have anything significant to speak at length on. If you only listen to one thing from my blog this year, make it this.

Damn I wish I had been at the VS. EP release party!