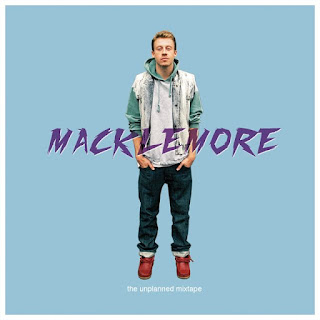 I have been bumpin' this mixtape in my car for 3 weeks now. I can't seem to get over tracks 1, 2, & 7. This is some real hip hop right here. The first track "The Town" is Macklemore's tribute to Seattle and the hip hop culture that exists there. Macklemore fills the track with emotion as he connects his city, his music, and their past all in one passionate song. Check the video below for "The Town" performed live. In the second track "At The Party", Macklemore tells the story of hip hop's past to present with a slight twist. He overviews the entire history and transitions of hip hop music in less than 5 minutes telling the story as if he walked into a party in 1979 and ended the night in 2009. Every single line in the song is a chronological reference to something that happened in hip hop's 30 year history. Then in the 7th track, Geologic of the group Blue Scholars teams up with Macklemore to talk about their views on religion in the song "Church". Both rappers come to the same conclusion over a simple but compelling beat; that you need to question organized religion and that God or faith can be found in the music itself. As Macklemore explains, "The spirit's right here and I don't have to see it. Now everytime I wanna connect with God put my headphones on, then I nod, grab my pen my pad let it seep in. And that's my process. God's always watching. Got God in my Walkman. Go ahead and top that". I can really connect with this message.

I ran across a quote on Macklemore's MySpace page recently by Bruce George (Def Poetry Jam Co-founder) that read "He is Common and Eminem personified". Two of my favorite rappers in one person? I knew there was something I loved about him that I couldn't figure out. Macklemore's newest project the VS. EP produced by Ryan Lewis is being released for digital download on December 15th. Check back here for my post on that soon! I'm ridiculously excited.

The two videos below are of Macklemore live in concert. Can't you just feel his positive energy flowing through the crowd!? He looks absolutely elated to be rapping for his fans.


Blue Scholars bring Macklemore out on stage at Soundset 2009 in Minneapolis to freestyle...

"Alright, we travel down a long road. Now, who knows where these songs go? I know. I rock it like this with the scenery, photoshop the overcast city that just lives in me. Southside Seattle, a whole lots happening, probably not a lot different than what's in Minneapolis. And my profession out here, making heads nod. And I wear headphones to my desk job. That's my revival, that's my freestyle, get onstage and forget my verse in this freestyle. That's right, they call me a terrorist, afterwards steal some shit from the Mall of America. Come back to the audience, share with ya. That's right, as Sabzi's snares hit ya. Speak the truth, honest, you know we be on it. Macklemore and Blue Scholars, hands up."- Macklemore's Freestyle