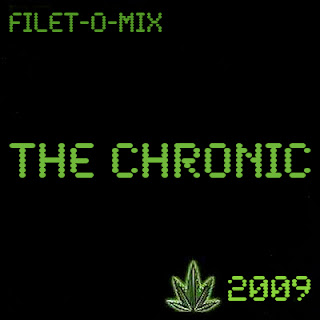 Preview A Few Tracks on The Chronic 2009

01 Cypress Hill - Hits From The Bong

03 People Under The Stairs - Come On, Let's Get High

19 The Pharcyde - Pack The Pipe

Continuing on with my themes of Hip Hop mix series comes one of the most timeless, the Weed mix (first of several). In this mix titled The Chronic 2009 I have compiled (in my opinion) some of the best rap songs specifically dedicated to the love of Ms. Mary Jane herself. Even if smoking is not your thing, this CD might make you reconsider... and if it is your thing, be a good smoker and PASS the mix along to your friends (on the left hand side of course).

If your favorite track didn't make it, suggest a song in the comments below and I'll consider it for the next mix. I had to narrow down a list of over 100 songs to 20 tracks so obviously I had some criteria for selecting these few. All rap songs that made the cut have tight beats, are nearly 100% about marijuana, and don't lose their appeal after multiple listens. There are some classic songs in there mixed with some of my new favorites (especially track 12). Check out the video for The Brownie Song below and a few lyrics (track 6).

"Rigormortis higher than a lion's chin, If this was symphonies I'm way up there with violins, If this a choir then soprano octaves, in an opera where God lives, Look I know I'm sounding like a liar but, The brownie's was angel sex - got a nigga high as fuck, I smoke trees'n through all four seasons, but I'm like gas prices - high for no reason. Call the nurse your boy's higher than Google Earth, and if I fell the impact would put me through the dirt, So let me zoom in and get my zoom on, This weed's Neil Armstrong - I'm on the moon blown" - Deacon The Villain


And now for some personal insights about marijuana and hip hop...

Everyone knows that hip hop is laced with drug references, but hold on don't be so quick to judge. There is quite a difference between the drugs they talk about for sale and those for personal consumption. Hip Hop as a culture does not embrace hard drugs such as crack, cocaine, and heroin. In fact, the music makes it quite clear that although selling hard drugs is glorified, using them is NOT. Selling hard drugs is glorified because it is seen as one of the few ways to make fast money and get out of poverty. However, there is a huge negative stigma in hip hop music towards the addicts or "fiends" that buy these drugs. They are looked down upon and disrespected by same bragging rappers who made their money off them.

It seems that the only drug that hip hop embraces (besides for alcohol) is marijuana. In fact, on many occasions I find it downright strange that the same drug can be adored by both the most hardcore rapper and the most free-spirited hippie (seemingly opposite ends of the spectrum). Even though the drug means different things to different cultures, ultimately weed has the same effects on the mood and behavior of most people. My point is that marijuana is a drug enjoyed and celebrated universally and should not be looked at in such a negative light (let's try to put illegality aside). After all, weed is conducive to musician/artist creativity, which is clearly shown in the works of these hip hop artists.


Enjoy the music. And just like weed, this mix is better when you share it with friends.