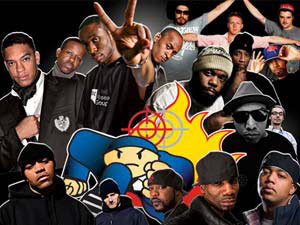 I got 4 juicy October concert listings for my New York area folks that might make you spend some money in this recession...

Who: AUDIBLE TREATS CMJ SHOWCASE: SOULS OF MISCHIEF, TANYA MORGAN, TRINITY (A.G., Sadat X, DJ Jab), KAM MOYE aka SUPASTITION, ODDISEE
When: Thursday, October 22, 2009 9:00 PM
Where: Southpaw, Brooklyn
Ages: 18 and over
How Much: $5 advance/$10 day of show
Why you should go: Because underground hip hop lives in Brooklyn and it just feels so raw
Website

Who: Duck Down Showcase: Blue Scholars, Smif-N-Wessun, Buckshot, 9th Wonder, Da Beatminerz, Sean Price, Ruste Juxx, Skyzoo, Team Facelift, Kidz In The Hall, and Marco Polo & Torae
When: Saturday, October 24, 2009 9:00 PM
Where: The Gramercy Theatre, New York
Ages: 16 and over
How Much: Who cares? But seriously…$20
Why you should go: It’s actually not possible to fit all of these awesome rappers on the same stage. The universe might collapse on itself so enjoy this concert while we still exist. Oh yeah, and I'll be there.
Website

Who: Snoop Dogg, Redman, and Method Man
When: Wednesday, October 28, 2009 7:00 PM
Where: Starland Ballroom, Sayreville, NJ
Ages: All? But shouldn’t be.
How Much: $40, but you know Ticketmaster, so that means $50 and parking is $6
Why you should go: Some of the coolest rappers to ever grace a stage come together to have a concert / cannabis cup.
Website

Who: CORMEGA with special guests LARGE PROFESSOR, HAVOC, FEME, LES, PREMIER, PETE ROCK, DR PERIOD, BUCKWILD
When: Thursday, October 29, 2009 9:00 PM
Where: SOB’s, New York
Ages: 21 and over
How Much: $15 at door
Why you should go: CD release party for Cormega’s New Album “Born & Raised”. For fifteen bucks at the door and all those guests, this would spice up anyone’s Thursday night.
Website

Think it over with this new video from Blue Scholars about Hawaii. And watch Sabzi eating throughout the whole video.