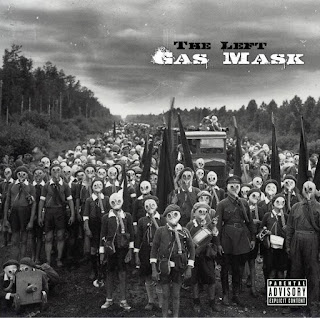 So there are times that I write blog posts just because I want to share music with you, but this time it's different. I REALLY NEED TO SHARE THIS ALBUM WITH YOU. Like, god damn, you HAVE TO hear this. If you have been a true fan of hip hop for years and have been dissatisfied with the new music that comes out these days because it doesn't give you that feeling of early 90's hip hop, then this is what you've been waiting for. It's an instant classic in my mind and I do NOT use that term lightly. This album is easily in my top two albums of 2010 for several reasons, which I will go into below (I'll leave my other top album of this year for another post).

Ok, so here we have a new collaborative group called The Left made up up 3 members: Producer Apollo Brown, MC Journalist 103, and DJ Soko from Detroit's gritty underground. Their album Gas Mask, released about two weeks ago, is a cohesive project of supreme quality... all 17 tracks are phenomenal. I was excited at the beginning of every track to hear what was coming next. Usually, I'm skeptical when I listen to new songs because I listen to sooo much hip hop that I'm forced to discriminate right off the bat, but this feeling went out window as I was anxiously awaiting whatever was next. Right from the get-go my hip hop spidey sense was tingling.

The production throughout the entire album by Apollo Brown is nothing short of amazing and blends perfectly with Journalist 103's flow - both of which are raw, gritty, and as consistent as they are creative. The tracks are formed around chopped samples of soul vocals, horns, and BANGIN drums that span the range of emotions everywhere from the somber "Homage" to the triumphant "Get In Where You Fit In" to the pensive "Binoculars". In fact, Journalist 103 describes the production perfectly when he opens the track "Frozen" with the lyrics "From the time you stick the disc in, it's the same feeling that a heroin addict gets when he stick a syringe in. I put you in the deep nod, back and forth, constant. Once I get in your system, there's no way you can stop it". Need I say more?

The storytelling style and timbre of Journalist 103's voice makes every track compelling to listen to over Apollo Brown's beats. This isn't your typical braggadocio rap (except for track 4). This is rap filled with deep thoughts and visuals. For example, on, arguably my favorite song and appropriately titled, "Desperation", the lyrics paint the picture: "I got one hand clutching the nine, the other's clutching the microphone. Trying to make a clear choice between the right and wrong. Trying to stay in the zone with the right mind frame, but I keep getting distracted, my whole life's changed. I done went from being the best at it to being the last to even get mentioned it's pure madness. I can go to the lab and be productive or throw my hands up at the world and say fuck it. The rap game - hate it. Hip hop - I love it". Damn, I love the energy that spills out of every track and the emotion that Journalist 103 pours out over these fantastic beats. It makes me wish every album had such complexity and artistry... and that every MC had an appropriately titled pen name.

What many albums lack these days is a consistency in their sound and overall song quality. The reason being is that nowadays we live in a world where music is consumed by the song instead of by the album. Thus, there is no need for artists to continue creating great albums. It is clear that mp3's have caused the "death of the album" as we know it, but the nostalgia for a great album will still resonate with the generations that grew up with them. It is clear that those who continue to stay true to the art of making quality music will in the long run gain more true fans that are willing to support them. The only questions is, will they last long enough in this dog-eat-dog world to reap the benefits over the long term? I really hope that these guys last, so if you take my word for it and want to support these guys, please buy the album HERE! You just might need some good speakers instead of headphones to tackle this bad boy.

Another appropriate quote to leave you with (sticking with the drug addiction metaphor): "There's nothing like it when you get your hit for the first time, so take advantage son, it comes once in a lifetime"