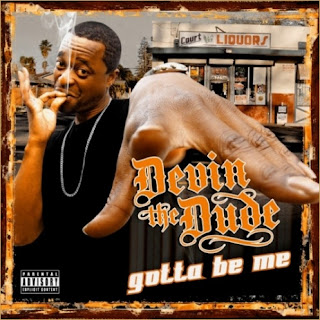 Download HERE
1. It's Going Down
2. Come & Go
3. I Like What U Do
4. Shut Up
5. Gotta Be Me
6. No Need to Call
7. Gimme Some
8. You So Real
9. They 10's
10. Jus Coolin
11. Ain't Goin Nowhere
12. When Will I Win?
13. Fuckha'
14. I'm High
I really love Devin The Dude and this right here is his NEW album that comes out today! Honestly, he's one of the greats who I never listened to until two years ago when a dear friend of mine pointed out this problem and promptly gave me my first Devin album. It was an eye opening experience and quite a trip when I soon realized that he was on Dr. Dre's famous album The Chronic 2001 (he was on the song "Fuck You", but seriously, who wasn't featured on Dre's 2001?).
The greatest thing about Devin The Dude is that he keeps it extremely simple with fantastic laid back beats and rapping that almost exclusively touches on 3 things: women, weed, and alcohol. Now you may be skeptical as to how an artist can really have enough to say about just those 3 things to make an entire album (or seven), but just listen to this album and you'll quickly understand. As long as you can appreciate his music's simplicity and his often crass sexual attitude towards women, you will definitely enjoy this. It's very easy listening material as far as rap goes and perfect for the casual weed smoker in you (because you may know that Devin celebrates marijuana - just listen to the title track "Gotta Be Me"). The production on this album is real clean with a Houston-influenced southern feel that leaves you all mellowed out. So just cool out. Cool out and listen to H.E.R.