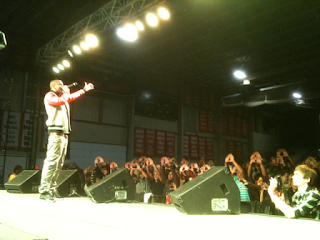 J. Cole performing "Last Call" this past Sunday. The crowd throws up the ROC diamond.
So this past Sunday, two amazing things happened that were worthy of a big WHO DAT!! First off, the New Orleans Saints won 34-3 over the Carolina Panthers. Second off, I helped produce a J. Cole and Fabolous concert on the campus of William Patterson University in NJ, which involved constructing the stage, sound, lights, and being involved in minor police altercations. Now if you find yourself saying, "J. Cole, who is that?" then you're about to get your introduction right now with this SWEET ASS VIDEO below (unless you've already helped make up some of the 7 million views this has on YouTube).


In case you didn't know, J. Cole was the first artist Jay-Z signed to his new label Roc Nation two years ago. His real name is Jermaine Cole and he was raised in Fayetteville, North Carolina (you will often hear him mention "The Ville" in his music). Since being signed, he has been steady climbing in the hip hop world collaborating most famously on Jay-Z's the Blueprint 3 track "A Star Is Born" and most recently on the radio smash hit "All I Want Is You" by Miguel (this is one of the only songs on the radio that I actually enjoyed recently).

J. Cole is not a commercial artist per se. He is not at all like Drake, although he has been compared to him due to his protégé status (J. Cole : Jay-Z :: Drake : Lil Wayne). Whereas Drake is a pop artist who sings and raps using a gimicky lyrical device that I would call "punchwords" instead of punchlines, J. Cole is exclusively a lyrical/story telling rapper catering to a more cult-following of dedicated hip hop fans. These two guys should never be compared in their styles, but they both follow the similar pattern of blowing up in popularity from their mixtapes before they even drop an actual album. J. Cole's debut studio album Cole World has no release date yet, but I will continue to wait patiently while I snag up all his mixtapes below. Make sure to catch the new one coming out this Friday here!!