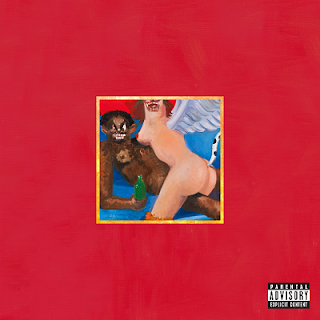 Kanye West is back and better than ever! In case you didn't get the memo, the new Kanye West album My Beautiful Dark Twisted Fantasy just officially dropped yesterday, but has been on the internet for two weeks now and I have almost played it out already! Yo it was so damn fresh that I JUST HAD TO play it non-stop for a week until I absolutely needed to change things up. I've probably given the album at least 6 front-to-back spins and a lot more spins on the more impressive tracks. Now, I finally feel confident in telling you that this album is a certified gem and one of Kanye's best. Welcome back Ye, we've been missing you since Late Registration.

So I've loved Kanye ever since I received a bootleg copy of his first album, The College Dropout, from a friend in probably 2003 hot off the streets of Newark, NJ (it had a few different songs and wasn't mastered yet). I was blown away by it and I could definitely tell that West would go on to do big things just by the sheer number of times that I played that album. I really had no idea that he would be THIIIIS big though. Fast forward to the present: Kanye is larger than life, but unlike many reality TV star celebrities these days, he actually is famous for a good reason... his music is absolutely superb, cutting edge, and beautiful. He, quite frankly, is a genius when it comes to production work. He just knows what will sound good and has the talent to make that happen. His rapping is an extension of the need to fuel his ego and also air-out his self-reflective thoughts as can be summed up quite succinctly in one of the opening lines "Me drown sorrow in that Diablo (lamborghini), me found bravery in my bravado".  Even in writing his lyrics, Kanye is quite talented and has remained pretty consistent throughout his career.

The new album, I believe, is the pinnacle of Kanye's production work to date. The album is mixed and mastered perfectly in a way that allows the beats to slightly overshadow Kanye's rapping, which gives tracks increased replay value as you can gradually pick up more and more of the lyrics over time (and realize just how good they are at times). Although the album is not perfect, the vast majority of the tracks shine bright and will make you put your blinders on to the not so perfect ones (the annoying Swizz Beatz chorus on "So Appalled", the dragging length of "Runaway", and the not-so-comedic dialogue by Chris Rock at the end of "Blame Game" are my only gripes). What I think surprised me the most about this album is that I had heard 6 of the 13 tracks before downloading the full album yet somehow the WHOLE is much greater than the sum of its individual parts. This body of work has such a strong continuity and innovative sound that it really needs to be listened to as a whole album to fully enjoy its complexity.

I highly recommend that the best way to enjoy this album is to first watch the Kanye West-directed extremely long, short-film "Runaway" (35 minutes), which incorporates almost all of the album's songs into a visual landscape of a "beautiful dark twisted fantasy" belonging to Kanye. Although it is somewhat long and requires a bit of a time commitment and some patience to watch, it is definitely worth it to watch before listening to the full album because the emotions that are provoked by the visuals in combination with the music will resonate with you more strongly when you listen to just the album afterwards (this really surprised me in a good way!). I love the idea of this short-film  concept because it is all about building a visual landscape around a soundtrack instead of the other way around. Watch the full version of "Runaway" in full screen mode for the best effect or watch my favorite excerpt from the film below.


Kanye is one of the best producers in hip hop right now and he is leading the music in a new direction. He is a pioneer, an egotistical asshole, and a genius. This is why we love and hate him so much all at the same time.

P.S. In case you missed it, Kanye has been releasing a new free collaborative track to download every Friday for the past 3 months through his G.O.O.D. Friday music series. There have been 13 new tracks released so far, my favorite of which being Good Friday featuring Common, Pusha T, Kid Cudi, Big Sean, and Charlie Wilson

Enjoy hip hop daily for best results and come back frequently. Subscribe to HeadPhoneHome's posts via email here (max one email per day).
Posted by Filet Of Sole at 11/23/2010