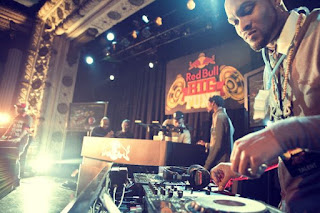 14KT wins the Red Bull Big Tune national hip hop producer championship last week in Chicago
Download #NewMusicFriday Hip Hop - 11/26/10 HERE
In case you're just joining in on the #NewMusicFriday trend @HeadPhoneHOME, I do a recap of the best new rap singles released from the past week. It's kinda like the top 10 plays on ESPN's SportsCenter, but I do it for new hip hop music. You can stream the new songs below or download the whole bunch at the link above. Highlights include a new leak from Kanye West & Jay-Z's upcoming "Watch The Throne" album, a new collab between Eminem & Royce Da 5'9", some dope smooth production by Budo, Deacon The Villain, Dela, Muneshine, and a beautiful song by a new artist Parker called "Sky Music". With all this great hip hop, you're bound to find something that speaks to your tastes whether underground or commercial. It's all certified dope music, so open your ears and press play...

Also, below are the new albums that I've downloaded this week. Check them out if you want to further your hip hop education. And check out last week's #NewMusicFriday - 11/19 Edition here for more bangers.

New Hip Hop Books
Jay-Z - Decoded (In Stores Now)
-This is a book by Jay-Z about the origins and breakdown of some of his most complex song lyrics.
Jay-Z - Empire State of Mind: How Jay-Z Went From Street Corner to Corner Office (Biography Due out in March 2011)

Latest Hip Hop Events
Red Bull Big Tune - Finals in Chicago
-Red Bull Big Tune is a beat battle between the nation's best up-and-coming hip hop producers. Contestants go head to head playing songs and the crowd decides who moves on to the next round for the best hip hop producer in America. The winner of this year's competition (last week) was 14KT from Ypsilanti, MI. He definitely is one of the best producers out there. I will be doing a new post on him soon, but until then, check out my last post on 14KT here.

Happy belated Thanksgiving!! Please share this post with your hip hop loving friends and subscribe to get new posts emailed to you here! Thanks for spreading the word.
Posted by Filet Of Sole at 11/26/2010